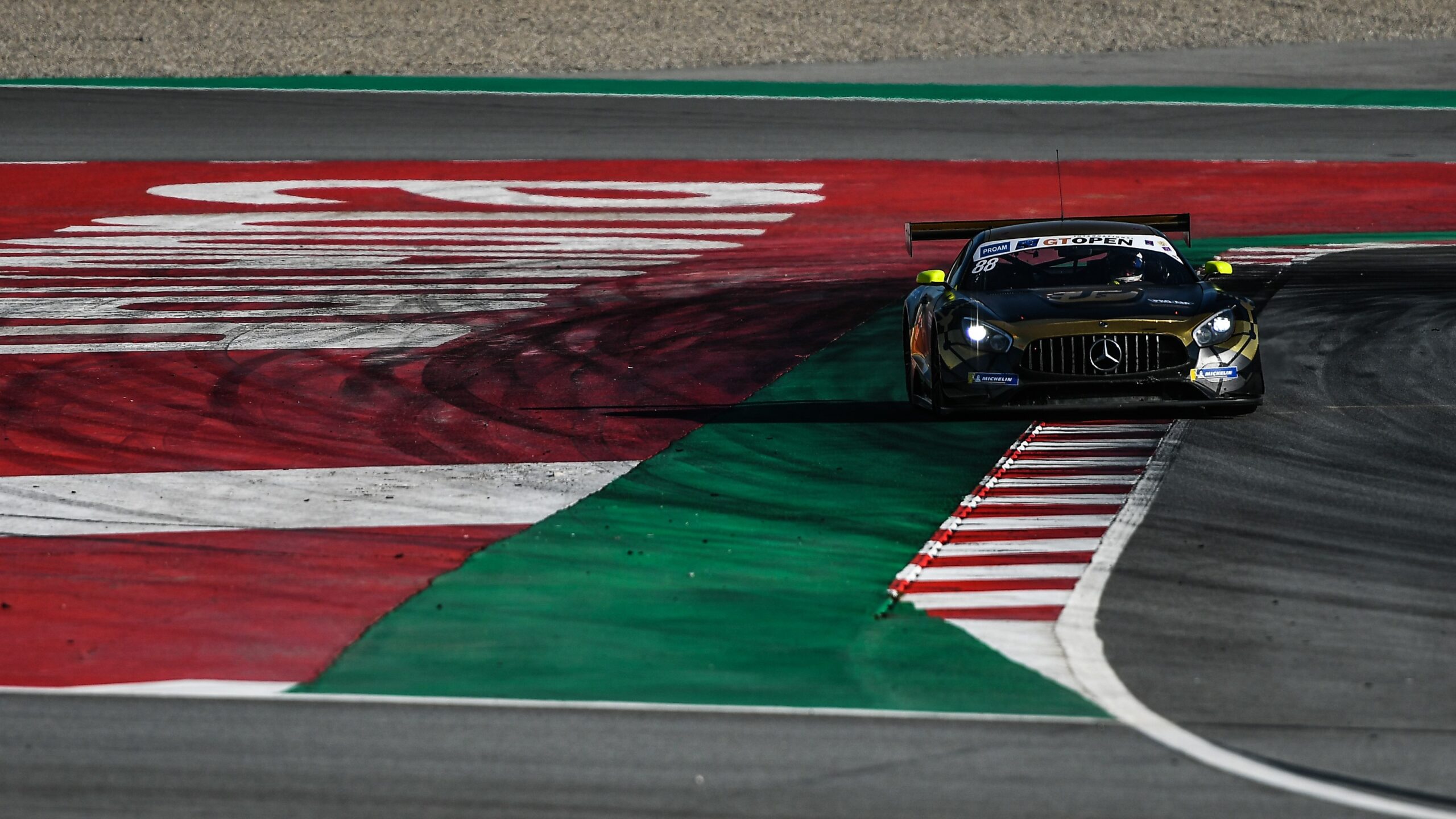 It was a heart-stopping final truly, with exciting races, great overtaking manoeuvres and all the drama you could wish for. But in the end, it was down to one missing point for JP Motorsport to lose out on winning the PRO-AM Championship title in their debut year. Still, the team around Christian Klien and Patryk Krupiński had two strong races. They bring home their third PRO-AM race win of the year in the season final.

Race 1 I Saturday, 31st October 2020
In late-summer temperatures, Christian Klien set the perfect ground stone for a good weekend. He took PRO-AM Pole Position as well as third on the grid and headed into the 70-minute race from the second row on Saturday. The PRO-AM title aspirant, the #16 Teo Martín Motorsport McLaren, was a total of seven positions behind the #88 Mercedes-AMG GT3.

Despite losing one position to the #7 McLaren 720 S GT3 at the start, the Austrian was able to keep close to the competitor and was soon in a position to put pressure on him. A great fight for third place formed, but on the fifth lap the #7 McLaren spun off the track after slight contact. Klien took over third place and was soon in the rear of the second-placed #17 Ferrari 488 GT3.

Due to the pitstop window, Klien jumped up into second place and headed into the pits on lap 22. Patryk Krupiński returned to race action in second place (leader in PRO-AM). Up until this point, the team was still running two places ahead of the #16 McLaren, but a Safety-Car in lap 25 reduced all advantages to zero.

Krupiński lost one position to the #7 McLaren 720 S GT3 at the re-start, whilst the #34 Aston Martin Vantage GT3 touched the back of the JP Motorsport Mercedes slightly. But the Pole kept control of the #88 racing car. The #16 McLaren, the main title contender, passed Krupiński on lap 31, who was now running in fourth place.

In an extremely exciting last phase of the race, the cars from fifth to the ninth place were running very closely. The Ferrari 488 GT3 with the number 17 took over the fourth place and shortly after, Krupiński was put under pressure by the #34 Aston Martin. The Pole, who races in his debut year, showed his strength with five cars behind him and only lost one position to the Aston Martin.

The #88 Mercedes-AMG GT3 was able to fight off the #33 Honda and crossed the finishing line in an overall fifth place and third in PRO-AM.

However, JP Motorsport was later given a five-second-penalty due to the contact with the #7 McLaren and was now listed in ninth overall and P4 in PRO-AM.

Race 2 I Sunday, 01st November 2020
Patryk Krupiński qualified in tenth place on Sunday. He started three places ahead of the main title contender into the final race of the season – and it should be one of the most dramatic races of the year.

The Pole made-up one position at the start of the race and also passed the #7 McLaren 720 S GT3 one lap later. Krupiński was running in eighth place and was able to manage a gap of 1.5 seconds. The #7 McLaren was back in the rear of the #88 Mercedes-AMG GT3 from lap nine onwards and the fight for P8 took its turn.

Krupiński managed to keep his position and pitted on lap 14. Klien returned to the race and started his attack. First of all, he lined-up the #72 McLaren and took P7. The Austrian had a four-second gap to the #26 Bentley which he made-up quickly only to then overtake his main title competitor, the #16 McLaren.

On lap 25, the leading car in the PRO-AM Championship made a mistake and spun out. Klien took his chance to overtake, running now in sixth place overall and second in PRO-AM.

Klien made up good round lap-by-lap with ten remaining minutes of the race, taking over the lead of the PRO-AM on lap 29.

Meanwhile, the two PRO-Class title contenders had an incredible fight at the front of the field. When both cars touched the Safety-Car was deployed for the last 30 seconds of the race. Therefore, the final race of the season was ended under the Safety-Car.

Klien secured the third victory in PRO-AM in the #88 Mercedes-AMG GT3 this year. After taking victory in the opening race, JP Motorsport also won the final race in their debut season. The team narrowly missed out on winning the PRO-AM championship title and is crowned runner-up in their first year of racing.

After giving penalties to other teams after the race, the #88 Mercedes-AMG GT3 climbed up one position to finish the race in third overall. The team celebrates, therefore, its second overall podium this season following third place at the Red Bull Ring.

Dirk Martin, Performance Engineer
“The season final of the GT Open was really something and it could not have been more exciting. The had a bit of bad luck in Saturday´s race, but we did everything right on Sunday. Unfortunately, despite winning the race in PRO-AM we were not able to bring home the championship title. Following the uncountable results, as its usually done in the GT open, we only had one point missing in order to win the championship. In the end, we were punished for running consistently this year. On one hand, it is very disappointing, but on the other hand, we can be proud of what we have achieved in our first year in GT3 racing. We came together as a new team last winter and we have undergone an unbelievable development. Patryk has also done really well and has made a huge step forward and can be happy with his job this year. We have one final race remaining this year, taking part in the GT World Challenge in Paul Ricard to which we all look forward to.”

Christian Klien (Austria)
“The race on Saturday was very chaotic. Unfortunately, we were given a 5-second-penalty after the race due to the contact I had with the McLaren. It´s standard within the GT Open to be given five seconds for any contact you have with another car without even asking any of the participants about the accident. It´s a real shame, but that´s how it is and we weren´t fifth but ninth in the end. For sure, we had other plans for our race on Saturday, I would drive the start and get a good advantage whilst Patryk takes over the rest. It was all possible. But Sunday it was a full attack. Patryk had a sensational start and overtook one car on the outside of turn 3. He had a real solid and faultless stint until he handed the car back to me. I gave my very best in the second stint. We had one set of new tyres, which we saved from qualifying and I was able to push all the way up into P1 for PRO-AM. Even if we have missed the championship title by one point, it was still a good day for us and a conciliatory end to the season for the entire team.”

Patryk Krupiński(Poland)
“Unfortunately, our car had a disadvantage as it had happened so often throughout the year due to the Balance-of-Performance. Saturday was not our day. Due to the Safety-Car periods, the five-second-penalty Christian was given had an enormous effect. My qualifying was not as planned on Sunday and it could have been much better for sure. But I was still able to gain two positions at the beginning. Christian put all in and we were first in class. With Sunday´s race, I am really happy, with the race on Saturday I am slightly disappointed with some of the decisions by race control as it seems penalties were just given without a proper reason. Unfortunately, the BoP-rules have been slightly unfair towards some teams throughout the year.”